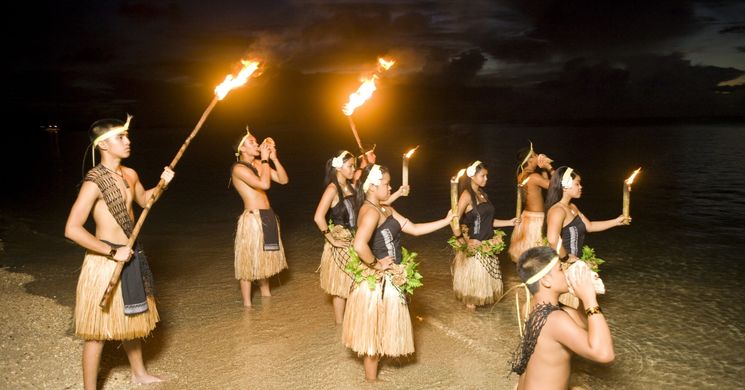 19.00: beginning of the parade at Judgement Tower

Folkart, which captured the hearts of the people of Maribor a long time ago and made us all rightfully proud of it, has entered its thirty-first year in existence with a bold, happy and optimistic attitude!

Last year, the Maribor Folkart, the largest Slovenian folklore celebration, marked 30 consecutive years in existence – three decades’ worth of celebrating intangible cultural world heritage. Folkart placed the city of Maribor at the centre of the European folklore map and made it into one of the most prominent folklore cities on a global scale. To mark this impressive anniversary, we dubbed the festival the “Window into the World” and a more apt description could not be bestowed upon it; this window of ours that invites us all to learn and feel new experiences has been swung open once more.

Folkart, which captured the hearts of the people of Maribor a long time ago and made us all rightfully proud of it, has entered its thirty-first year in existence with a bold, happy and optimistic attitude! It calls to all people with a free spirit and open heart who wish to see beyond their immediate horizon.

In June, our city will welcome the most prominent folklore groups from Europe and other, more remote continents. Get ready for the feisty Irish and their dance steps that inspired some of the most famous dance shows; we will be able to experience the softness and pride of Macedonia and the fiery vivacity of the Ukraine. We will marvel at the mysterious culture of the Mayans and Inca from Mexico and embark on an exotic journey to the Guam Islands. Folkart will also look into the eyes of the faraway and mystic land of China and set its sights on the untamed Russian ancestors from Bashkortostan (Bashkiria) hailing from the Western edge of the Urals.

Rounding up this diverse and colourful group from all parts of the globe will be Slovenia, most notably our fellow Mariborians, the Academic Folklore Group Študent.

And so, our world-renowned International CIOFF® folklore festival Folkart will once again clothe our city in the beautiful and diverse colours of cultures from all over the world!

Guam is the largest archipelago of the Mariana Islands located in the West Pacific, also known as Micronesia. The island of Guam is better known for its strategic military and economic position between Asia and the North American continent than for its complex cultural history. Archaeological finds have shown that seafaring peoples first inhabited these islands over 4000 years ago. These peoples later became known as the Chamorro people.

The island’s tumultuous and bloody history of conquistadores left a great imprint on its culture. Guam was occupied by three different colonial forces – Spain, the US and Japan.

Nowadays, Guam is an unincorporated territory of the United States, which is reflected in its modern, American lifestyle. They’ve nonetheless managed to maintain the culture of the indigenous people, the Chamorro. The prehistoric concept “inafa'maolka” – do good for others – is the fundamental value of the traditional Chamorro culture. It is manifested by respecting one’s family, community and the elders.

The ensemble Inetnon Gef Pa'go operates as part of the Historic Inalahan Foundation programme at the Guam Department of Education. Young people work together with masters of the old tradition in representing the heritage of the Chamorro people in main tourist promotional campaigns across the entire island, as well as at festivals all across the globe.

Absolutely Legless, a traditional Irish dance group, was formed in 1997 by experienced and respected dancers and musicians in Edinburgh. Through the years of performing all across the world, their innovative performances and quality have firmly entrenched them as a dance group with one of the best interpretations of Irish traditional heritage.

Absolutely Legless draw their inspiration from the deep Irish treasure chest, particularly the Irish hard and soft shoe traditions. Despite their fresh and modern dance approach, they remain true to the deeply-rooted tradition. They excel at mixing the hard shoe dance, which is full and energy and rhythm, with the softness and elegance of the soft shoe dance, creating a truly exciting experience.

We are all more or less familiar with the commercial version of the Irish “tap” dance from the Lord of the Dance musical or the River Dance show. Naturally, the creators of these shows got their ideas from the Irish treasure trove.

It is therefore all the more exciting that we will be able to see and live the real and true Irish tradition in Maribor, which will be, beyond any doubt, a wonderful experience. We will be able to witness an exceptional combination of the Irish dance heritage and authentic Celtic rhythms, courtesy of the backing band filled with tried musicians.

Macedonia is known as the land of the sun, lakes and friendly people. The sun is the symbol of freedom and is pictured on the Macedonian national flag. The country has a rich culture as well as a rich and tumultuous history that had led it through numerous changes, all of which left a mark on the lives of its people. Many still preserve their heritage with love and devotion, which is why the way of life of their ancestors is maintained in a most authentic form.

The glory days of the state of Macedonia came under the rule of Phillip II and, later on, his son Alexander the Great, who turned what was once a small country into a powerful empire. After his death, the empire slowly began to crumble, leading to a conglomerate of different cultures that merged together into the culture of the Macedonian Slavs. Due to its strategic position, Macedonia was often split up during history, but luckily all attempts to destroy Macedonian culture were in vain.

The folklore ensemble Koco Racin from Skopje has been preserving these vast riches of Macedonian culture since 1946. They developed into a world-class folk group that appears at major festivals all across the world.

In their rich history, they received more than 400 national and international awards, recognitions, medals and diplomas, which they have been proud to present in their offices for more than 70 years.

They’ve travelled and appeared all across Europe, Japan, Iran and Iraq, and a few times in Australia, Canada and the US.

They are among the select few folk groups that can easily be labelled as gems of the folk tradition treasure chest. Dancers and musicians of the Koco Racin ensemble are known for their fiery spirit, colourful personalities and top-level quality. We will be able to enjoy an all-round excellent and fiery performance by the young Macedonians at Folkart.

The group was formed in 1999 at the Department of Art and Culture of the Kyiv National University.

Their most important goal is to perform new dances and preserve the best folk and stage-dance samples. The group’s repertoire encompasses the majority of Ukrainian folk dances, as well as other and diverse traditional dance expressions, interesting ideas and creative approaches to stylizing the traditional folk dance art.

Ukrainian folklore stands out with the richness of genre, deep faith and enthusiasm. Before folk heritage was more closely followed and documented, the only way to preserve and share customs, traditions, folk wisdom, views of the world, and ideals of the Ukrainian people was by word of mouth. Folklore not only became a mirror for the most important historical events in the Ukraine, but also a way to preserve numerous archaic pagan myths and dance and song skills, a topic that the Kyiv National University pays special attention to. They were, for example, able to preserve the famous 15th century folk dances such as the Hopak, Kozachok and others.

The world-class skills of the members of the ensemble is the result of targeted and devoted efforts of the teachers and students of the Department of National Choreography.

As members of the ensemble regularly acquire rich performance experience both on the national cultural scene and at leading concert venues, the Kyiv ensemble became an ambassador of academic traditional culture. Their excellence has earned them numerous top-place finishes at competition festivals not only in the Ukraine, but also at international events across Europe. This is the first time the ensemble will appear at Folkart. 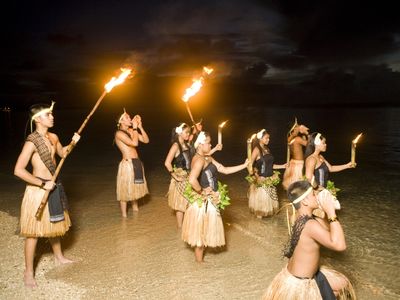 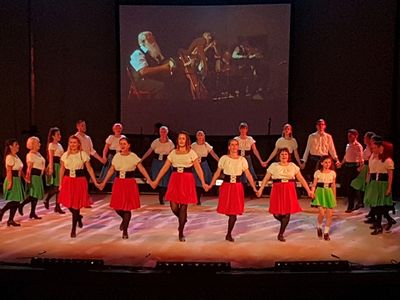 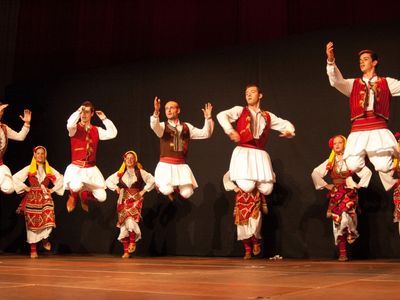 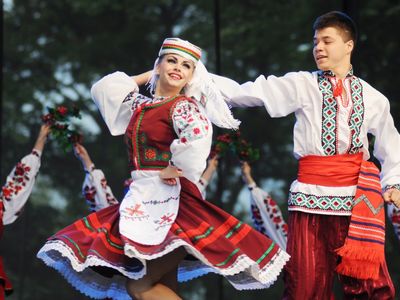