Recognizable tunes and richness of harmonies in the scores that combine elements of pop, jazz and ethno, are enriched by mostly Slovenian lyrics. 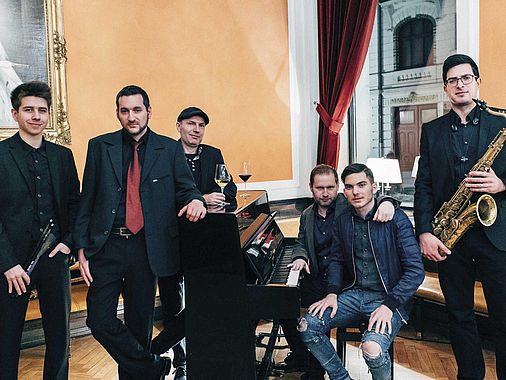 A night woven of harmonious melodies; don’t let it pass without you.

Flora & Paris is the musical child of three band members of the well-known Slovenian band Orlek who felt the need to create a different sound. In mid-2012, they began to arrange the musical ideas of Jure Tori and Matej Fele, supported in rhythm by Mitja Tori on the bass guitar. Some six months later, the fellas met singer Flora Ema Lotrič who, aside from her voice, lent the band her name. Percussionist and drummer Blaž Celarc and saxophone player Tjaša Perigoj were the latest members to join after having shared their music ideas with the band. Flora later moved to pursue studies abroad and the band took a new singer, Patricija Škof.

In 2016, the band got younger – the singer was replaced by Žan Libnik, finalist of the TV show Slovenia’s Got Talent, and Peter Jeretina, student of the Celje High School of Music, became the band’s new drummer. Ever since they first started playing together the band have been big supporters of unplugged music, as this style tends to be softest on the human ear, all while leaving plenty of room for manoeuvre in terms of dynamic and volume of expression.

In the musical sense, the band often try to fuse that which cannot be fused – quality of artistic expression, be appealing to a broad audience, and be commercially successful. Recognizable tunes and richness of harmonies in the scores that combine elements of pop, jazz and ethno, are enriched by mostly Slovenian lyrics. According to the band, Slovenes have a rich and melodic language we are fond of communicating in.